Part 2: COVID 19, and Why Chimps Are Better Than You at Making Sense of the World

Read: Part 1: COVID-19, and Why Chimps Are Better Than You at Making Sense of the World

In the first installment of this two-part series, we reviewed the results of a study which showed that most people are not merely uninformed about the world around them, they are devastatingly and systematically misinformed. We also identified the Fear Instinct as one of the biases that fog up our understanding of basic facts. In this second installment, we shall review 5 of the 10 dramatic instincts covered in the book Facfulness by Hans Rosling, and some of the ways I think they may be negatively influencing how we think about the ongoing COVID-19 pandemic. 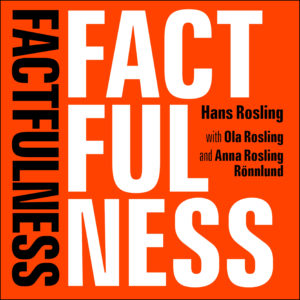 The negativity instinct is the tendency to notice the bad more than the good. We see this in the news media all the time. Every incident of domestic abuse overshadows the innumerable happy families sharing love, kindness and hearty laughter. Every air crash that hogs the headlines crowds out the reality of the millions of passengers who safely arrive at their destinations each day.

No doubt, each layoff, closed business or life lost as a result of COVID-19 is a shattering experience for the affected individuals. To these people we must extend our sympathy and support. Nevertheless, we must not let the pain blind us to the gallant and selfless efforts of our healthcare workers, government officials and ordinary citizens who rise to the occasion again and again in support of their fellow countrymen. It is these stories that will keep us hopeful and optimistic during these trying times.

To insulate yourself against excessive negativity, remember that good news is rarely sensational or exciting and therefore tends to go unnoticed. Also, most progress occurs far too gradually to make the headlines.

The straight line instinct causes us to assume that trends, such as population increase, will just continue unabated unless drastic action is taken. In reality, most processes tend to be self-limiting.

In 1900, the total global population was 1.6 billion. In 1950 it was 2.55 billion, and by the turn of the century, it had risen to 6 billion. Today, the world population stands at approximately 7.8 billion. By examining this trajectory, it is easy to panic and conclude that in another hundred years, the population may well be 50 billion people!

Surprisingly, the best estimates we have show that the world population will taper off at about 11 billion by the year 2100. Already, women are having two and a half [sic] fewer children today than they did 50 years ago as a result of better education, increasing wealth and access to contraception. This fact alone means that population growth rate is declining and, in fact, will eventually stop.

Looking at the rising cases of COVID-19, it can be tempting to conclude that the disease is bound to infect us all in the fullness of time. This is not the case. The seemingly ever rising line will bend, eventually, and the number of cases will begin to fall. This is bound to happen even without any intervention at all. With the ongoing concerted efforts to contain the infection, the line is expected to flatten at a much lower peak.

To reign in your straight line instinct, keep in mind that most straight trend lines reflect a “zoomed in” view of a more complex trend. When all the data is finally in, many trends turn out to be S-bends, slides, humps, or doubling lines.

The fear instinct refers to our tendency to pay more attention to frightening things, even if they do not pose the greatest risk. On the flip side, we tend not to accord the right amount of attention to less frightening but more dangerous threats.

I gave you the example of terrorism deaths in Part 1. Statistically, your chances of dying from cardiovascular disease are 700 times more than those of dying from a terrorist attack. Yet, precisely because terrorist attacks are … well … terrifying, many of us grossly overestimate the risk. On the other hand, for most young and healthy people like myself, the prospect of heart disease seems like such a remote possibility that we cannot be bothered to eat healthy and exercise regularly to forestall it. Yet that’s precisely what will kill a third of us.

Recently, the Ministry of Health in Kenya reported that the number of patients seeking healthcare has reduced significantly. Reason? People are afraid of visiting health facilities for fear of contracting COVID-19. This is the fear instinct in action. A patient suffering from a dangerous chronic condition puts himself at a greater risk by avoiding the hospital than by visiting it.

To avoid succumbing to the fear instinct, notice that much of what frightens you has been selected by your or the media’s attention filter precisely because it is scary. Also, understand that the risk posed to you by any threat does not at all depend on how scared it makes you feel.

The size instinct causes us to take things out of proportion. This bias is surprisingly easy to fall prey to. Going back to the terrorism example from Part 1, 26,000 deaths caused by terror attacks in a single year, on its own, is a pretty staggering number. Assuming a capacity of 416 passengers, 26,000 deaths is the equivalent of 63 Boeing 747 crashes a year in which not a single soul survives. That’s more than one jet going down every week for an entire year! But that is small potatoes when compared to the leading killer. In plane crash terms, the 18 million deaths claimed by cardiovascular diseases in 2017 works out to 5 fatal 747 crashes every hour for one full year! Go figure.

Coming back to COVID-19, the most commonly reported indicator of the progression of the disease is the total number of infections per country, usually disaggregated by deaths, recoveries and active cases. The media loves these numbers because they are easy to understand and communicate. But far too often, the size instinct leads us to misinterpret them.

Consider the United States, for example, with its more than 1.5 million cases at the time of this writing. Singapore, on the other hand, has a corresponding 29,000 odd cases. It’s tempting to conclude that the prevalence of COVID-19 in the US today exceeds that in Singapore by a wide margin. But does it?

To eschew the size instinct, Hans warns to: “Never, ever leave a number all by itself. Never believe that one number on its own can be meaningful. If you are offered one number, always ask for at least one more. Something to compare it with. Be especially careful about big numbers.”

The generalization instinct leads us to erroneously group together things that are actually very different and treat them as if they were the same. For instance, no less a personality than America’s 2008 vice presidential candidate Sarah Palin was once accused of thinking that Africa is one country. In any case, while people won’t typically refer to a German as a European, Kenyans, Ghanaians and Moroccans are all routinely lumped together in one supposedly homogeneous group called Africans. This despite the fact that scientists tell us that there are larger genetic differences within Africans than between Africans and Eurasians.

A few weeks after the first case of COVID-19 was diagnosed in Kenya, a video of a group of rowdy locals harassing an Asian man and woman while shouting “You are coronavirus!” was posted on the Internet. There was no good reason to believe that the two were infected with the virus. Nevertheless, knowing that the virus had first been diagnosed in China, the locals concluded that any Chinese-looking individual was carrying the dreaded disease and could potentially infect them. This is the generalization instinct at play.

Without knowing whether the Asian pair had recently returned from China and what their disease status was, there was no reason to assume that they were infected. For all we know, they may well have been in Kenya for many months prior, and therefore no more likely to be sick than the bullies themselves.

To avoid the generalization bias, look both for differences within groups and for similarities across groups. People or things who seem different at first glance may turn out to be quite similar on closer examination, and vice versa.

There you have it! For more on these and the remaining five instincts not covered here, I highly recommend that you pickup and read Factfulness. Then you can thank me later.

Oh, and what about those clever chimps?

Uh … I am sorry I kind of … lied. Obviously, no one administered the test to chimpanzees, although with Hoji you probably could. 😉 And if you did, the chimps would in fact average 4 out of 12 correct answers. This is a mathematical fact arising from the statistical notion of Expected value.

Each of the questions in the Gapminder test offers 3 options for selection (A, B and C), only 1 of which is correct. With no knowledge of human affairs, chimpanzee respondents would have to pick their answers at random. The odds of selecting the correct answer for each question are 1 out of 3 (33%), since only one option is correct. Think of it like how the odds of flipping heads on a fair coin toss are 1 out of 2 (50%), since there are only two possible outcomes.

Moral of the story? The humans who took the Gapminder test, in 2017 performed far worse than a respondent choosing their answers at random would have.